I’ve been searching for some eggless cake recipes for my Mother-in-law’s birthday. Since she doesn’t eat eggs, I thought it would be a good idea to make her a special homemade cake. I wanted some simple recipe that doesn’t use any egg substitutes or special ingredients that are hard to find. While not having much luck or time with finding one that I would like to make, an image of a very beautiful cake popped in my head. I remember seeing a cake recipe in ‘Great Vegetarian Dishes’ by Kurma Dasa but never really thought of making it. Since the occasion calls for it, I thought I’ll give it a try and see how it turns out.

It is a basic cheesecake with Ricotta Cheese addition which makes the cake little crumbly but still tastes pretty rich. Topping it up with whipped cream and fresh fruits makes it extra special. I made crust using Graham crackers instead of following the recipe and also made glaze to go on top of the fruits. I’ve also changed the ratio of ingredients used in the filling. This is mainly because original recipe was in Grams and when I convert it into Ounces; I was not able to get exact measurements in standard supermarket packages. Since I didn’t want to buy extra ingredients or have any leftovers, I decided to tweak it a bit. It did turn out quite beautiful and tasty.  I do have to admit though that I’m really not crazy about Cheesecakes but Birthday Girl seemed to love it. 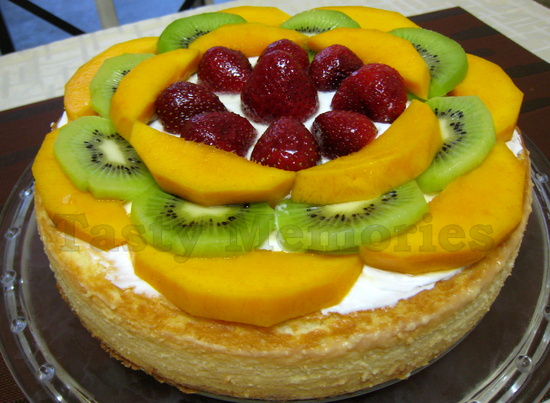 Directions:
Mix all ingredients in a small sauce pan and heat over medium heat for few minutes stirring frequently until slightly thicken. Remove from heat and let it cool completely.

Keshu
I grew up eating a variety of different dishes and cuisines on a daily basis from a wonderful mother who was also a fantastic cook. As a child, I never really had an interest in cooking, and missed out on a golden opportunity to learn. When I started living on my own, I began to miss all the food that I grew up eating, and I realized that I had no idea how to prepare those dishes. Luckily I was able to turn to my elder sister for most of our mom’s recipes. With her recipes, I started to learn how to prepare these wonderful dishes and rekindled my love affair with delicious food. A thought has been lingering in the back of my mind for the past few years. I want to try and collect all the recipes that my mother and sister use, and put them in a book to share among family members and friends. I have yet to accomplish this, but one day, a friend of mine suggested that I start out with a blog. So here I am to share the recipes with all of you. Please enjoy with your families and loved ones.