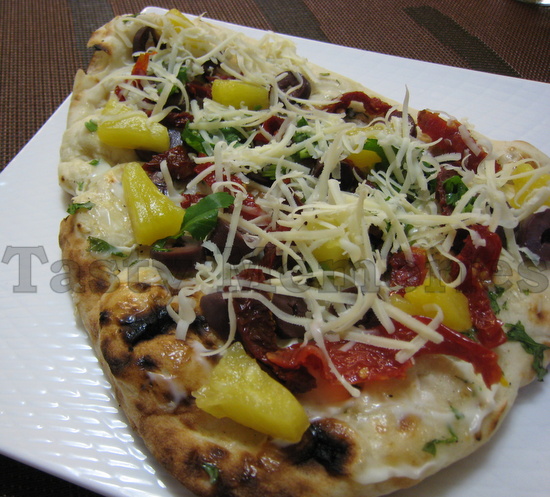 Naan Pizzas are easy and quick to prepare and is delicious. One lazy evening, I didn't feel like cooking and we were totally out of fresh vegetables at home. The only thing I had on hand was some frozen Naan, sun dried tomatoes, olives and cheese. So we decided to just make Naan Pizza out of it. Since I didn’t have any marinara or pesto sauce on hand, I decided to spread some mayonnaise on it. It just took few minutes to put together and came out quite satisfying so we have been making this every now and then. This is not exactly a recipe but I thought I'll share since we like it a lot. 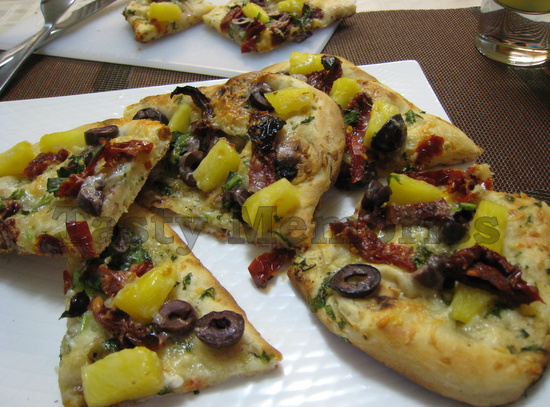 Directions:
Note: I used toaster oven so it took me about 8 minutes. If using a big oven, it might take a little longer to cook.

Keshu
I grew up eating a variety of different dishes and cuisines on a daily basis from a wonderful mother who was also a fantastic cook. As a child, I never really had an interest in cooking, and missed out on a golden opportunity to learn. When I started living on my own, I began to miss all the food that I grew up eating, and I realized that I had no idea how to prepare those dishes. Luckily I was able to turn to my elder sister for most of our mom’s recipes. With her recipes, I started to learn how to prepare these wonderful dishes and rekindled my love affair with delicious food. A thought has been lingering in the back of my mind for the past few years. I want to try and collect all the recipes that my mother and sister use, and put them in a book to share among family members and friends. I have yet to accomplish this, but one day, a friend of mine suggested that I start out with a blog. So here I am to share the recipes with all of you. Please enjoy with your families and loved ones.